Beate Kutschke Oct 13, 2021 Beate Kutschke
Music was integral to the profound cultural, social and political changes that swept the globe in 1968. This collection of essays offers new perspectives on the role that music played in the events of that year, which included protests against the ongoing Vietnam War, the May riots in France and the assassination of Martin Luther King, Jr. From underground folk music in Japan to antiauthoritarian music in Scandinavia and Germany, Music and Protest in 1968 explores music's key role as a means of socio-political dissent not just in the US and the UK but in Asia, North and South America, Europe and Africa. Contributors extend the understanding of musical protest far beyond a narrow view of the 'protest song' to explore how politics and social protest played out in many genres, including experimental and avant-garde music, free jazz, rock, popular song, and film and theatre music. 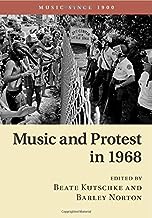 Book Title: Music and Protest in 1968