Beau Riffenburgh Oct 13, 2021 Beau Riffenburgh
In 1911 Douglas Mawson organised and led the Australasian Antarctic Expedition (AAE) - a scientific investigation of the Antarctic on a scale never before considered. At the same time it was responsible for the exploration of vastly more territory than any other Antarctic expedition. It consisted of three land bases operated by 32 men, seven major sledging journeys (as well as numerous shorter ones), and a full oceanographic programme in addition to its shore-based scientific studies. Yet what was intended by Mawson to be a scientific exercise devoid of heroic adventure, also proved to be a tale of death, determination, and raw courage. The late Sir Edmund Hillary described it as the greatest survival story in the history of exploration. The dynamic character of Mawson, the expedition s sheer scale, and that most of what happened on it has never entered the public consciousness were very appealing reasons to investigate such an epic venture. The result is the first examination of the full expedition since Mawson s The Home of the Blizzard was published in 1915. As well as a pull-out map the book has over 70 photographs and 11 maps and drawings 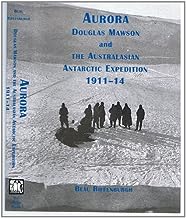